Once upon a time, there was a girl named Kaylin who was looking for something different. She was not sure what that was yet, she only knew at that point what she did not want. Having spent years using maladaptive coping skills to deal with the pains of her past, She was very aware of the fact that she had left a trail of wreckage behind her. Wanting more than to live a shallow yet socially acceptable life she began searching. She worked remotely in the woods for a season, seeing more bears than people, meditating on what it was that she was looking for. She traveled, backpacking around the country visiting friends and sleeping on couches, and volunteering on farms in Europe. All of this culminated in a decision to spend a year volunteering on a farm in the green mountains of Vermont. This time was intended to be solitary. To continue to turn towards herself and to identify the areas for growth that were needed in order to be her best self. However, as it goes often when we are not in search of something, that thing will find us.

While sitting at the breakfast table with her 13 housemates one morning she was asked the question of whom she would like to be in a relationship with. She responded that at this point in her life she was not looking for a relationship, however, if the universe happened to send her an astronaut pirate, vegetarian lumberjack, firefighting cowboy, then she would happily oblige such a man on a date. Well, unbeknownst to her that day one of the people at that table set up what was meant to be a joke dating profile on a local website. Which said the following:

Hello. I am looking for an astronaut pirate, vegetarian lumberjack, firefighting cowboy, all others need not apply. Unless of course, you are a 10 out of 10. Have a nice day.

In the weeks that followed, many other men responded to the initial ad, yet they never heard back. Because the young woman was too busy engaging in an email correspondence with the ninja named Patrick. At this point, the young woman explained that while she had very much enjoyed the correspondences she was in fact not really looking for a relationship at this point in her life. That the whole thing had been a flippant comment made at the breakfast table one morning, and that somebody had actually set the site up as a joke. But that she had very much enjoyed getting to know him. She also explained that while he seemed very nice the reality was that she lived and worked on this crazy-ass farm in the middle of nowhere, that she worked essentially 24 hours a day seven days a week, and did not have a car or license. To which the young men responded that he, in fact, knew this crazy-ass farm in the middle of nowhere, that he had co-founded the Special Olympics basketball team in the area with the founder of the farm, and that he had spent time babysitting the children on the farm all while he was in high school.

At which point the heroine finds herself dumbfounded.What are the motherfucking odds that of the thousands of people using this dating website that the only person she had been in conversation with had played a pivotal role in the history of the place that she was now living? So clearly she invited him over for dinner. To be fair I am skipping over some damn heartwarming details, but their are only so many hours in the day to write and we must get on with the show.

He arrived at the farm on an afternoon where everyone was preparing for a tropical storm coming up the coast. Earlier that season the vegetable crop had already been washed away by a storm. So the community was taking the preparedness quite seriously. Various groups had been delegated to take on different tasks, and Kaylin’s crew was to prepare by securing all of the pond items. As he pulled up in his car and got out in all of his six four four inch glory, with an old cut off T-shirt, and a creeper mustache, she was filled with remembrance. This was not meeting a person for the first time this was seeing someone that she had known her whole life. It felt as though this person had been with her on every step of the journey up until now. This was an old friend, and so she smiled, waved, and said ”I’m going to go get a boat out of the water now” and then walked away.

Throughout the afternoon he performed admirable feats of strength. Dragging docks out of the water, lifting paddleboats over his head and placing them onto the rack of the farm truck, and reassembling a hand sander that had disintegrated for no apparent reason in the hand of Kaylin. After this last act, she looked at him and proclaimed ”You are a God among men.”

The courtship continued on in a slower fashion. He would come and visit her whenever he had the chance always diving headfirst into whatever task she was doing and she continued to make space for him in the life that she had already started creating on the farm. Three weeks later as they sat on a second-story porch de-ending a laundry baskets worth of green beans she looked at him and said ”I thought that I was the last unicorn, but I am not because you’re a unicorn too. And so we should probably be unicorns together.”

Though absolutely terrified of both the realization that she loved this man and that he may not love her back she replied ”I am falling in love with you.”

He smiled ”I love you too.”

And they both sat in the warm sun smiling and working their way through a butt ton of green beans. 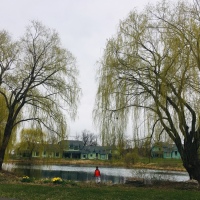 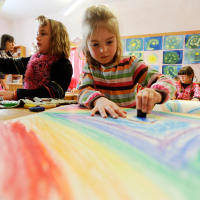